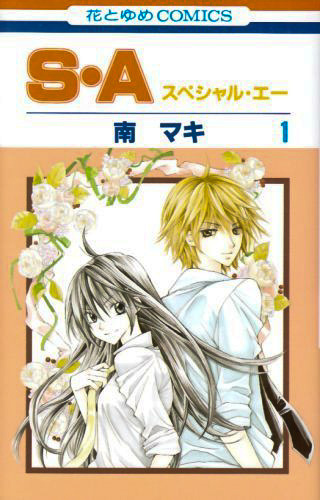 Surely, Minami Maki came up with a quite unique title. It really caught my attention. Just a random fact about S.A: ZA Hana to Yume is a sister magazine to Hana to Yume. The ZA is just the Japanese transcription of “THE” (since the “th” sound doesn’t exist in Japanese and one of closest sounds that can be used to substitute it is “z”).

ZA Hana to Yume has a less frequent publishing schedule – issues appear something like four times a year, I think. S.A was first serialized in ZA Hana to Yume (before moving to the regular Hana to Yume), which is why the first four chapters kept reintroducing Hikari, Kei, and everyone else and why the art between chapter 1 and 2 looks rather different. This is all thanks to Kaeyko from S.A LJ page.

Since this is a SHOUJO manga, expect cliches everywhere. For example, how many times have we encountered an exceptional group in a school, or the heroine is the only one “different” in the clique, or a couple trying to win against one another? In other words, it’s not a rare topic but then again I buy it. Haha.

The story started interesting. You see, you became intrigued by how will Kei express his feelings when he is not good at it and will Hikari recognize it when she is so dense. There are some parts that are flat. The plot seemed to lie-low a bit when they became a couple (and since it seemed that Hikari did not know the meaning of being a couple). Then, it regained again (all thanks to Takishima). The issues are all disclosed. I don’t feel that they lacked something in the end.

Each character has established their identity, though some weren’t given much exposure. Both leading characters are generic, too. I’m glad that most of the characters mature until the end of the story. They were able to turn their weaknesses into strengths. I guess, the only problem is the lead girl. She remained constant the whole story.

The general theme of this is a comedy, school life, and romance and they accomplished it successfully. The story also taught us the value of friendship, the importance of communication with your loved ones, expressing yourselves, and being competitive enough to pursue your dreams. We also can’t help but sympathize with the characters’ situations.

The art is also good. They’re way better than their anime counterpart. There’s a complete distinction between the characters. Same as the effects. Some parts are a bit messy but the others are very clear.

Now, it’s up to you if you will read this. It is still better to see it for yourself. 🙂