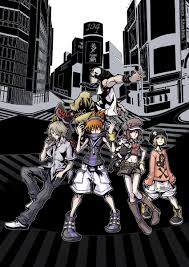 Yee~hess! After 2 long years, I’m finally able to beat the game! o/ Not that I find it boring when I first started playing TWEWY. More like, my attention at that time goes from one game to another…and another couple more games lol. There is so much to cover from this one that it becomes overwhelming. I’m pretty sure that I won’t be able to write all of them but I’ll try to at least mention that stuff.

Let’s start with the gameplay. This RPG game does not end with you go through the missions, knocked off enemies, collect things as you go with the story, and so on. TWEWY is equipped with dual screen gaming, where Neku swipes and slashes Noises in the bottom screen and you can also control your partner to fight using the D-pad. You may or may not control your partner though. On the phone’s Menu, you can choose Auto and let your partner fight however they want when you don’t want to control them. I chose this setting initially so I can concentrate on controlling Neku, not to mention it is pretty confusing to fight on two screens at first. But eventually, as you go through the game, there are some battles that I needed to fight on the top screen thus controlling my partner as well.

Main character Neku is equipped with the ability to use ‘psychs’. It’s like an ability to use the power of different pins whenever convenient. Each pin have their brands depending on which store they are made and abilities which you can use when fighting. For example, Neku’s player pin enables him to scan people around him (except for Players) and know their thoughts. Some pins allow you to fire bullets or cast fire to your enemies. This is also where you maximize your touchpad. To activate each psych, you either tap, slash, drag, etc on a specific area or target. Also, some psychs evolve ala pokemon! Lol jk. But yeah, the more you use them, depending on the rate of their growth, they will evolve in a more powerful psych! You can mix and match around to see which one suits you in a battle. This is actually one of my favorite part of the game. I love seeing my fave pins grow and evolve to see what they can do more to turn the enemies into ashes! Muahaha. They are totally hip and cool looking, living up to Shibuya’s taste.

Speaking of hip and cool, you can buy stylish clothes around Shibuya’s stores! If pins are your weapons, these clothes are your armor in this deadly battle. Imagine fighting and yet still looking drop dead gorgeous. Isn’t that way too cool? What you wear affects your battle gauges. But what you wear is also affected by what is trendy in a certain area. For instance, the brand Natural Puppy is number 1 around Dogenzaka and you happen to be wearing the brand’s clothes and pins, your attack will be doubled. Well, this wouldn’t be a game revolving Shibuya if it wouldn’t be as a trendsetter as the real one.

As much as I love this game and its elements, I found myself scratching my head when using some psychs. You see, some pins’ abilities overlap the other. Like when I’m slashing to activate pin A, but instead the one activated is pin B. Or I want to move Neku but I accidentally activated this pin because dragging is also a way to activate it.

Once you finish the main story, a new chapter will open. It is called “Another Day” where the main focus of the story is about the Tin Pin Slam — previously a mini-game to the story. It has the same set of characters but not connected with the main game.

Also, you get to replay each chapter of the game from the very start up to the last battle. Each chapter has a requirement for you to fulfill to unlock the report for that day. These reports are meant to somehow answer your lingering questions about the story.

The game has a unique set of interesting characters which you can relate to!

The antisocial, wangst-filled teen protagonist of the story.

At fifteen, Neku is an ardent fan of graffiti, but far less enthusiastic about forging relationships with other people. When the Reaper’s Game throws him into contact with other Players, he has two choices: open up… or get picked off.

When I first saw Neku, my thoughts are the same as him. I mean, some people can get really annoying at times. Being thrown in this game all of a sudden, it is understandable that he would get dubious to anyone. Sure, he is an ass at the start but along the way this guy will show you that somehow he is just like us.

Neku’s first partner and the first one who is able to crack his shell.

Fashionable and fabulous at fifteen, Shiki knows clothes. While she puts on a cheerful face to lend Neku some much-needed moral support, deep down she harbors a secret… She never parts with her homemade stuffed animal, Mr. Mew; to survive, Neku can never part with her.

Just like Neku’s first impression of her, I found her annoying. She puts this bubbly act and nags away. I can never like uber cheerful characters like her. Surprisingly, she is someone whom most teenage girls can actually relate to. And I give credits to her for being able to change both Neku and mine’s impression of her.

The random kid who happens to have a random pact with Neku.

It’s quickly evident Joshua is clever beyond his fifteen years and as sly as they come. Unfortunately, his insufferably snotty attitude only serves to widen the gulf between him and Neku… but his knowledge, especially about the Game, does earn him some points.

Most of the time, characters with playful fronts yet insightful intrigues me. But not Joshua. Nope nope nope. His snotty attitude does not only annoys Neku but it extends to me (you see, that’s how I totally relate to Neku lmao). But then again, he is just a character you’d love to hate but can’t. Up until now, I am harboring this love-hate feeling for him and Joshua looking like Snake from 999 isn’t helping to fully hate this character.

The other player who lost his partner.

Hot-blooded and hard-headed, Beat is the polar opposite of Neku, even if they are the same age. Still, despite his emotional outbursts, he has a big heart. He’s always ready to throw down and ollie into combat on his board, with Rhyme right there beside him.

I salute Neku for being able to keep up with his weird partners. Beat is the type who acts first before he thinks. Despite the hip personality, he cares so much for his younger sister and is willing to do anything for her. The same care goes with his friends. Sure, he is someone whom you’d love to put some leash at times but it’s fun having him around.

There are other interesting characters which I won’t be able to write about but I assure you they know how to heat up your game! xD

Anyway, there are lots of theories about the ending of the game roaming around the net. If you collected all of the reports and managed to re-play the last chapter again, there’ll be an additional cut in the epilogue. At my first round of finishing the game, I was thinking who was the person Neku was addressing to. He said the words, “I can’t forgive you; Trust your partners; I can’t forgive you, but I trust you.” I assume he was one of his partners and there’s only 3 of them so he might be referring to Joshua. Can’t forgive him to what? Because Joshua killed him just to have a proxy in the game? That’s the logical conclusion I could think of.

During their duel, Neku lowered his gun despite his apparent anger with Joshua. So Joshua won? Then why didn’t he erase Shibuya as planned? Some say that he had a changed of heart when he saw that Neku changed because of the game. If that’s the case then, the question will be is Neku and the others alive? From what I’d seen, it is yes. But that might probably what I wanted to perceive.

Neku also said that after a week, he was able to see his friends. He uttered, “See you there?”. The scene shows Hanekoma and composer!Joshua on top of the building, overlooking the other characters. So I think, all throughout the epilogue he was addressing to Joshua? I was half-wishing I’d see human!Joshua with them, though. ;3;

All in all, one great game you must not pass. Unique set of characters, awesome designs and music, and action-packed game. TWEWY has all of them.

*Note: Generally, you wouldn’t need a guide to finish the game. But I had to use one when I started ‘Another Day’ or re-play the other chapters of the game. Of course, it’s such a pain in the arse to play it again and run around Shibuya looking for pig noises or items. Otherwise, you’ll end up like me finishing a chapter without completing the necessary items needed to read the report and looking like this (＃ﾟДﾟ).

11 thoughts on “The World Ends With You”