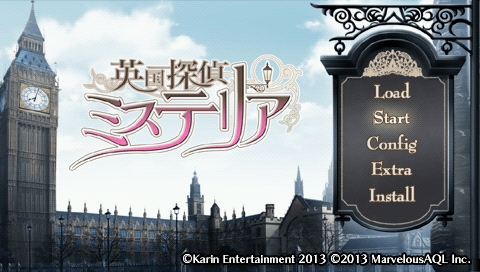 Synopsis:
The story starts with Emily will be making her debut in the society through the Queen’s party.

Little did she know that she does not only paves her way to the world of nobility, but she will also be tackling her first ever case. That is, to find a cat owned by no other than the Queen! As a token of gratitude, Queen Victoria has granted Emily a chance to study at Harrington School; a school which has a special class for detectives. The Queen gives her a ring that only students from that school have and thus her detective life begins!

So I started another game with an oujosama as the heroine, has a butler (not dateable in this one though), and a phantom thief. But unlike the previous game that I played, this has a heavier theme and a freaking long common route. xDD Anyway, so just like what I put on the synopsis, Emily goes to the detective class of Harrington Gakuen by the recommendation of the Queen. Her school life, as well as her interactions with the other characters, start from there. Every chapter introduces a new character and/or there is a case that they are going to investigate. Chapter 1 to 9 is your common route. After that, you’ll enter the guy’s route which extends until 3 or so chapters which made me glad because it won’t be too long nor too short. Though I am a little wary at first that if the common route has 9 chapters, I’m afraid that a guy’s route might be that long as well.

Characters are introduced in every chapter. So instead of introducing all of them in the 1st chapter, we get to chapter 2 for Marple, 3 for Jack, and 4 for Lupin. Each chapter has different cases in which Emily has to solve. I find some of them a tad boring (maybe I was expecting murder cases? Too much CSI ><;;) which is news to me since I loved detective stories. Although I can say that the transition of cases from petty crimes to large-scale ones are good. By the time I reached chapter 5, I’m starting to wonder when will I ever go to a guy’s route. I’m getting impatient that I start to multi-task lol. I guess, their reason for having a long common route is to hone Emily’s skills as a detective as well as slowly building her relationship to a certain guy. But it’s still long. lol

As for the routes, the guys (Holmes, Lupin, Jack, Watson, and Akechi) have Sad & Good ends. Oh but only Jack have 2 Bad ends & a Dead end. Jack and Lupin’s route will only open on your second playthrough though. Holmes and Watson have a friend end too. There is also an end for Kobayashi which you can get by branching out from Akechi’s route. Marple has a friend end as well. If shoujo-ai bothers you, don’t worry it’s pure friendship :)))). Then there’s the truth route which will only open once you finish all the routes. It’s pretty short and there won’t be choices because you will only read and read until it’s done. For the order, I did Akechi->Kobayashi->Marple->Friend End->Watson->Holmes->Jack->Lupin->Truth end. The plot opened up nicely in that order so I can recommend that one. Even so, I have this weird thought that if you want you can do Watson->Jack->Holmes->Lupin since they appear in others route. Like in Watson’s route, Jack played a big part and vice versa (okay not really big in Jack’s route xD;;); so as Lupin to Holmes route. It may have only been me though. wwww

One thing that I love in the system is how you can choose to skip through the dialogues or skip on to the next choices. That is some handy stuff since imagine skipping all those lines in the common route. L-button serves as go back to previous choices and R-button as the go to the next choice. Sadly, you can only go back to the choices but not in the scenes. So if you missed a scene, buh-bye. Just review the lines in the backlog. :D;;

What I hate is there is a timer in the choices. I don’t know how many seconds it is because I panic (now I panic whenever choices pop out in a game orz). If you did not choose within the time limit, it will automatically choose the first option. If that is not the answer you want, just press L-button to go back to it.

By clicking Select, you can see Emily’s detective rank as well as a gauge for each guy. A full gauge means, of course, getting the guy’s good end. Half-full means a sad end.

Now the characters! 😀 I had a hard time with the names because lol katakana so expect errors. LOTS OF THEM. It even took me a while to realize the names for Hudson and Lestrade.:lol:

As an orphan, she lived a sheltered life outside London with her butler, Pendleton, and their maids. Her entrance to Harrington is her first time going to school since Pendleton is tutoring her ever since. I liked her guts. She started all cheerful and just curious on things (that’s how she got caught up with her first case), then she, sort of, evolve into a detective with the way she thinks and acts that even Holmes acknowledges her skill. Emily is brave enough to face any problem heads on even if it’s about romance. Simply put, she is a good heroine.

Other than being a tsun, I don’t think I can say much about Akechi >A<. I am in zzz-mode and couldn’t care less in his route. BUT I TRIED TO LIKE HIM OKAY? I really did. It’s just…it’s not for me. I find it adorable whenever he babbles and mumbles like an idiot. Sadly, it stops there. He is not that dere too. He doesn’t even have chemistry for Emily so how can I root for him. D:

Nevertheless, I can’t completely hate Akechi for the fact that he is such a bro in others’ route. He is the type whom you can always trust on (though maybe not as dependable as Holmes xP).

His route is also known as the rebound route because seriously that’s only it. He goes all protective of Emily all of a sudden because she is sad that Akechi’s avoiding her. He is always there so as to make her happy. Moreover, he is the one who knocks some sense to that tsun megane which is ironic. It should have been the other way around. No matter what he does, he is ~forever~ shota in my eyes. 8D

-Emily’s gal friend who always seems to have a grand snack with her. XDD

Marple looks cold and distant but is also a reliable friend who can shot down the other characters especially Pendleton! /o/ It’s as if nothing can baffle her. She is from the countryside too just like Emily. It is sad not seeing her in the case in the truth end because I wanted to see what she will do for her friend. But nope. 😦

I find Watson sweet and his route an ‘okay’. Well, he’s a little better than Akechi so…xD I liked him as a character. However, his route somewhat grates me especially in his sad end where he avoids Emily because he has low self-esteem. 😐 Shouldn’t it be the other way around?! I was like ‘dude wth is your problem? (=_=)’. Holmes being a bro that he is, lectures him about his feelings and all that which is surprising since Holmes =/= romance lmao. Still, Karin pretty much nailed it with the exchange of rings thing so I forget Watson’s previous dumb moves. Sorry, I’m weak to those cheesy things. orz

His route (and the game) ended without me ever seeing Watson Sr.. Every time Holmes Sr. pops in, I’m hoping he’ll be there too. But noooo. /sigh

A game where you can freaking date Holmes??? A____A /grabbyhands

While I still can’t fathom why Sherlock married and had a kid despite his misogynistic personality, I am sooo glad his son inherited most of his characteristics. One of them is being a jerk lol. Herlock doesn’t recognize Emily’s detective skills at first and appeared ore-sama with his superb skills. Buuuut he is not a complete bastard to claim a case where she solves instead of him. Did I mention that he is super moe, he shouldn’t even be legal. (≧∇≦)

Just when I was ready for a long sad route, it ended suddenly. Unfair! I had to go through Watson’s long one, why not make it a little longer for Holmes too? /sobs It’s also sad that Jack and Lupin are not mentioned or appeared in his end. D:

Jack Millers (I seriously thought it is Mirrors at first orz)

– AKA Jack the Ripper. He is also the other moe king. 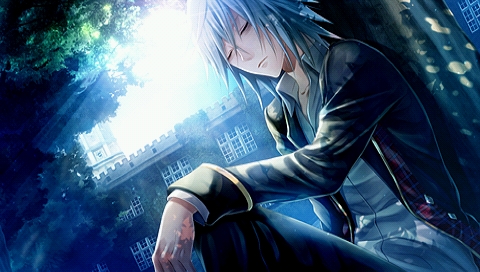 Emily’s the first person to befriend Jack despite his attempt to shoo her away. Little did they know that he is Jack the Ripper who have killed who-knows-how-many people. How can they miss that it’s him in Watson’s route? HOW?

Jack’s route is bittersweet. So much that I had to take breaks to cause my heart can’t take it. (´；Д；｀) why does his sad route name ‘sad’ when it’s heart-wrenching. (ToT) The other sad end is not sad (okay except Holmes, ’cause I feel bad for Emily and him). But Jack’s end is beyond sadness, I don’t even… (┯_┯)

This guy is so adorable when you get past that cold facade. It’s like he’s cute when he isn’t even trying to be one. That’s why, even if I’m not in his route whenever I see him or even if his only dialogue is “zzzz”, I always smile because you just can’t hate him! I treasure his route a lot because you get to see what he is really thinking. Other than his route, you rarely hear him speaking about himself because he’d rather sleep or he doesn’t care. You’ll find out how much he cares about Emily which is actually the most endearing part of him.

He looks cute to bully in his lame act…and I’d love him to bully me when he’s in phantom mode too. Oooppsss. xDDDD

But then, Lupin’s route has given a rollercoaster kind of emotion. One moment I’m all then I’ll be then and so on. It’s like Emily is playing hide-and-seek with this guy. I feel bad for Emily going through a loop of emotions. Good thing, she has a backbone and not just wallow in depression when he went MIA.

The most memorable scene in his route? That freaking cave scene. One moment I froze then hyperventilates so bad. OMFG you are so not for the weak hearted Lupin. (///v///) 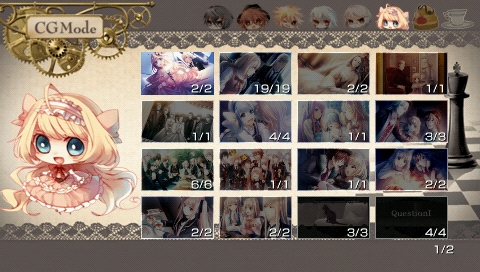 Art and music are both wonderful. It gives you the 19th century feels. However, the characters look like shota and loli to me in their stills (except Jack because he is awfully tall xDD). The CGs are lovely and somewhat sparkly.

Speaking of sparkly, the music almost sounded like that as well. Got to love the op and ed song.

Overall, this is a good game with equally charming characters, art, and music. Unfortunately, the common route sapped my energy so I somehow skipped some parts.