If I hadn’t known, I wouldn’t have guessed that the Konohara Narise who wrote Castle Mango is the same one who did Don’t Worry Mama and The Man Who Doesn’t Take Off His Clothes. Castle Mango has a more solid plot than their previous works.

Shirosaki lives in a love hotel his family owns. There he meets the AV director, Togame, when his production team shoots in their hotel. Right from their first meeting, Shirosaki doesn’t have a good impression of the director. What’s worse is that he learns that Togame is gay and is fond of his little brother Satoru. Shirosaki decides to take an action at the cost of what?

What goes around comes around.

It all started with Shirosaki’s plan to separate Satoru from Togame. The more he spends time with the director, the more his plan backfires. It’s a common plot device that is handled well. When he started his plan, he is cold and distant. He never relies on anyone and carries the burden alone. Throughout the story, as his plan fails, his character grows. Little by little, he starts opening up and reaching out to other people. So I guess, in a way, his plan takes a surprising turn.

I was drowning in feels by the time I finished volume 2. Feels all overrrrrr.

I’d choose volume 1 over volume 2 as the former has lighter moments. There 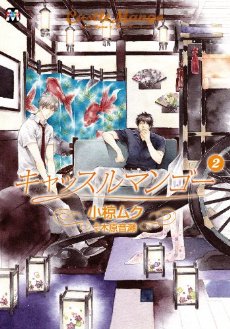 are flirty, make out scenes which I totally enjoy. Not only that Shirosaki is cute when he let his guard down, but Togame is also that cool and carefree adult who pulls Shirosaki out from his shell.

But that is the catch.

Togame is too much of a perfect boyfriend, that it is suspicious. I wanted to cheer on their relationship to succeed but at the back of my mind, I know my support will be in vain because how could a relationship built with lies succeed?

The pain continues to the 2nd volume when their personalities reversed. Togame started distancing himself from Shirosaki. What frustrated me is that he continues to string along Shirosaki with all of his confusing actions. Did he save Shirosaki from entering AV because it would ruin his company if they let a minor work? Did he help in the repairs of the hotel for Shirosaki or for Satoru alone? Everything is so vague about Togame. Heck, we can never be so sure if he really likes the younger guy.

As much as I got frustrated with Togame, my heart bleeds for Shirosaki. He’s been casted aside by reasons unknown to him. He shoulders every problem that comes their way, never whining. He’s been so alone.

After so much feels, I’d expect a satisfying ending, not keeping me on the edge of my seat and internally screaming “This is it? THIS IS IT???”. The resolution comes in quickly. Togame still has reservations about their relationship despite them being together. And after so much pain, I’d gone through while reading volume 2, don’t expect me to just take a short lovey-dovey moment to mend my broken heart. It’s not enough! I need more of these two.

The setting where it all started takes place in a love hotel. Now, I have only anime and manga as my reference, but I’m pretty sure love hotels don’t have that kind of homey feeling Castle Mango has. Ogura Muku’s art is able to show that kind of feel in their drawings.

Castle Mango has distinct rooms their clients can choose from. There is a room with a merry-go-round in it, a planetarium, a room with bars and punishment area among many others. It actually doesn’t feel like a place where people fuck. Because despite the kind of hotel that it is, Castle Mango is more of a place people make love.

Castle Mango is definitely a good manga. It’s the kind of manga you’d want to see more. Two volumes are not enough to show more of Togame and Shirosaki. I’m looking forward to the light novel River’s End to hopefully give me some background about Togame and more fluff.