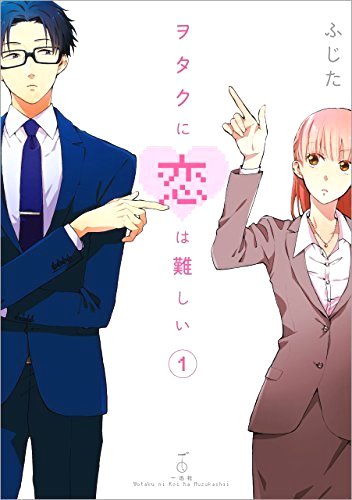 Wotaku ni Koi wa Muzukashii is the manga I didn’t know I needed in my life.

The term otaku has a negative connotation in Japan. “Normal” people tend to shy away from these geeks. Some otaku have to hide their hobbies so as not to spook those around them. Narumi does that perfectly. She looks like an ordinary looking office lady. But meeting Hirotaka, her childhood and gaming buddy, in their office crumbles her public persona.

Fujita first posted Wotaku ni Koi wa Muzukashii on Pixiv. It got famous, and now Ichijinsha is publishing it. Currently, the series is on its third volume.

As both Hirotaka and Narumi are hardcore otakus, Fujita shows all kinds of fans or fandoms through them. For instance, they are gamers. Then, Narumi’s love for BL becomes apparent in her doujin. Some are cosplayers. Others love to collect figures of their waifus.

The story is drawn in clear panels, so it is easy to follow. In fact, some parts are like Omake that fills in between chapters. They are usually nonsensical but comedic scenes. They add nothing to the plot but gives more information about the characters. Sometimes, there are a lot of extra pages in between chapters that I already forgot which part of the story I am.

Being a manga about otaku, there are anime, manga, and game references scattered throughout the book. It is fun recognizing them. There are even game-lingo the characters used.

Love is difficult for everyone

Fujita presents the struggles of otaku in a funny way but still rings true to any fans. Like any couple, Hirotaka and Narumi have to deal with hurdles in their relationship. For one, Narumi questions their relationship if they are going out only because it is convenient to go out with fellow otaku.

Despite all the comedic scenes, Fujita is still able to give us some romance that comes in like a good surprise.

I’ve been wondering why a manga this good hasn’t gotten an anime yet. Everyone should read this and enjoy Narumi and Hirotaka’s antics.