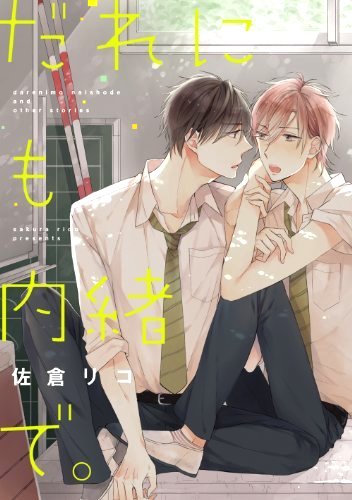 Maki is the cool and popular guy in his school. Because of his looks, everyone thinks of him as someone expert on dating. In reality, though, he is a virgin. He believes that sex should only be between two people who loves each other. Too bad for him, his classmate Miyashita discovers his secret. In exchange for keeping it, Miyashita forces Maki to go out with him.

Meanwhile, in Fukigen My Lover, Souta worries about his relationship with Ishitaka. He is not sure how things should progress between them or if he is even ready to take their relationship to another level.

Blackmail is such a negative word. I thought I’ll be in for some dark story. Thankfully, it isn’t anything extreme like that. Miyashita might have blackmailed Maki, but it’s more of hanging out together as friends. As the story progresses, the whole issue is brushed under the rug. It becomes nothing grave as the word implies but more of a way to tease Maki.

What I like about Miyashita is how he never forces Maki to do things that the other doesn’t like. Except of course about the dating part but aside from that, nothing else. He appears to be a cold and opportunistic bastard, yet he turned out to be a softie seme. However, his proposition of going out is a little abrupt. For one, the two of them didn’t have any prior interaction together. There is just a panel of Miyashita commenting on the noise around him (that concerns Maki), but that’s it. We get nothing that shows that either of them is interested in one another, even as classmates.  So I was like, “wait, what!?” when he proposes that the two of them should go out.

In contrast to the dark theme the trope implies, the romance is rather laid-back. Kind of slow-burn if you think about it. They may be “in a relationship” right at the start, but those two still go from friends to lovers. They take one step at a time. It’s as if this kind of pace compensates to the abrupt start.

On the other hand, there’s Fukigen My Lover in this one. I haven’t read Ijiwaru yet, so I’m a little lost in the story. Maybe I’ll come back to this once I finished reading the original story.

All in all, I still prefer Okubyou Mono ni I love you over this as it has more fleshed out characters and relationship compared here. But still, I enjoyed reading Darenimo Naisho de with all the cuteness and fluff Miyashita and Maki provide.