We’re finally on my 3 favorites!

I am mostly interested with Okita even back when I was watching the anime. And it’s quite frustrating that in that era there’s still no cure for tuberculosis.

Okita is perhaps the most dangerous guy in the Shinsengumi. Not only is he one of the best swordsman among the lot, but he is also someone who is difficult to read. He throws jokes and threats with the same smiling face. Like that time when he is playing with the kids. One of them mentions how Kondou looks like a wimp. Okita laughs it off at first despite Chizuru getting real angry. But when he plays with the kid by lifting him up, he lifts him high and never puts him down until the kid apologizes for saying bad things about Kondou.

He takes pride in being the Sword of Shinsengumi – the killing machine. But this turns as a problem in his route when he can no longer wield his sword because of his illness. Through this, his childish nature shows. I’m not saying that he is a kid. It’s just that he sulks like one when reprimanded and never shows how he really feels. While he looks like an independent adult who puts walls all around him, he is actually the kind of person you can’t leave alone. 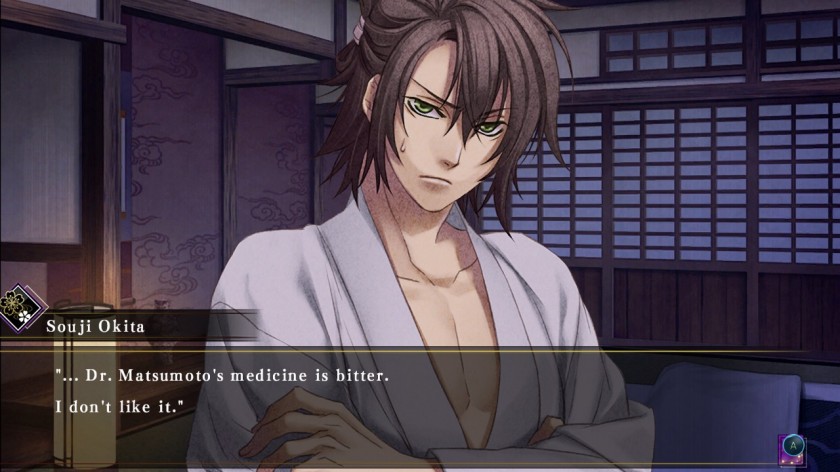 What I like most about Okita is how he often tease Chizuru. Sure, he can be annoying. Sure, it is mostly cold-blooded threats of killing at first. But once Chizuru gets on his good side, his jokes are like the ones you say to your friends and not out of malice.

Okita’s life revolves around Kondou. The same reason why his loyalty lies in Shinsengumi, no matter which side their group chooses. For him, Shinsengumi is the realization of Kondou’s ideals.

There’s this CG in the game showing young Kondou, Inoue, Hijikata (he is such a bishounen even at that time www), and Okita (already flashing his mischievous grin). I wonder what was the story behind it. I thought there would be a backstory in his route but it wasn’t even mentioned. Kondou once said after Okita got sick, that if something happens to Okita, Kondou wouldn’t be able to face her. I assumed that “her” means Okita’s sister. And even that is something I read from the Wikipedia http://www.  I hoped there’ll be more stories on the early start of the Shinsengumi or even just how Kondou and Okita met.

Hijikata is known as the Demon. He often looks stern and ready to scold anyone who breaks the rules. But Hijikata isn’t respected because of that. In other routes, despite his strict nature, he lends his ear to his men and listens to them. As seen in Nagakura’s route where he broke the rules, Hijikata admits that there’s probably a problem with how he leads resulting to Nagakura’s behavior. Also in Okita’s route, Hijikata let Okita’s rampage slide after noticing that the other calmed down. I enjoyed seeing this side of Hijikata because he is a great leader after all by not just enforcing the rules but also looking out for his subordinates and admitting his shortcomings.

Hijikata is the one who orders Chizuru’s captivity. But in times of trouble, he’s the first one to help her. I thought that the guy I’m after will be the one who saves her. Yet oftentimes, it is Hijikata who does. He cares for Chizuru as much as he cares for his men. One example is on Yamazaki’s route where Chizuru wants to help the Shinsengumi. Hijikata orders her to deliver a message to Saito. He commands Yamazaki and Shimada to follow her. Not because he’s afraid that she’ll escape or she won’t deliver the message, but because something might happen to her on the road.

Another thing that I like about Hijikata is his wisdom. He loooves to lecture his men. But his lectures are not all “you should do this or do that”. He gives words of wisdom like a good teacher does to a student. For instance, Chizuru bows to get her permission to stay with the Shinsengumi. Hijikata, then, says that she shouldn’t bow easily. If she believes in what she is saying, she should stand firm with her head held up high. Small things, I know. But I find those things admirable. I finally understand why these prideful men respect this guy. 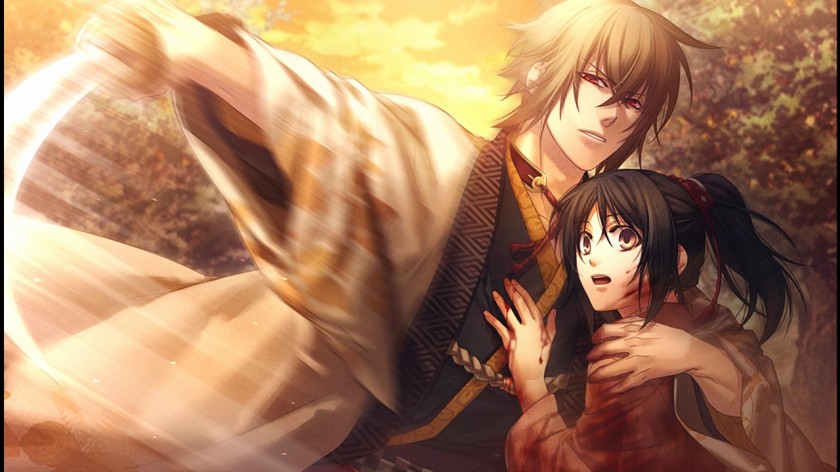 This is my favorite CG out of all of Kazama’s CGs because this is the only time he looks menacing to other people in order to protect Chizuru. All this time,  Kazama acts as an antagonist for the Shinsengumi. He often belittles their effort and makes fun of fighting for their honor. All the while trying to abduct Chizuru, hell-bent on making her his wife.

Kazama looks like the biggest jerk you’ll ever meet but his route made me reconsider him. He picks a fight against the Shinsengumi not because he has personal issues with them (other than keeping Chizuru from him). He fights against anyone who goes against what he believes in, be it a human or a demon. If you go against his principle, you go to his bad side. If you fight for the same thing, you’ll land a place on his good one. Nothing personal.

I think this screenshot below sums up Kazama’s personality:

Since Kyoto Winds is only the half of the story, it is hard to judge if I like this route or not. I wanted to like it. But there’s just a lot of things that I haven’t seen or known about Kazama. I hope Edo Blossoms have a better way to wrap up his route.

Compared with other routes, there’s barely a hint of romance in any of these routes. I love these three as a character but it feels like all I’ve seen in their Kyoto Winds routes are just mini scenes.

Next up will be about the new characters included in this game!