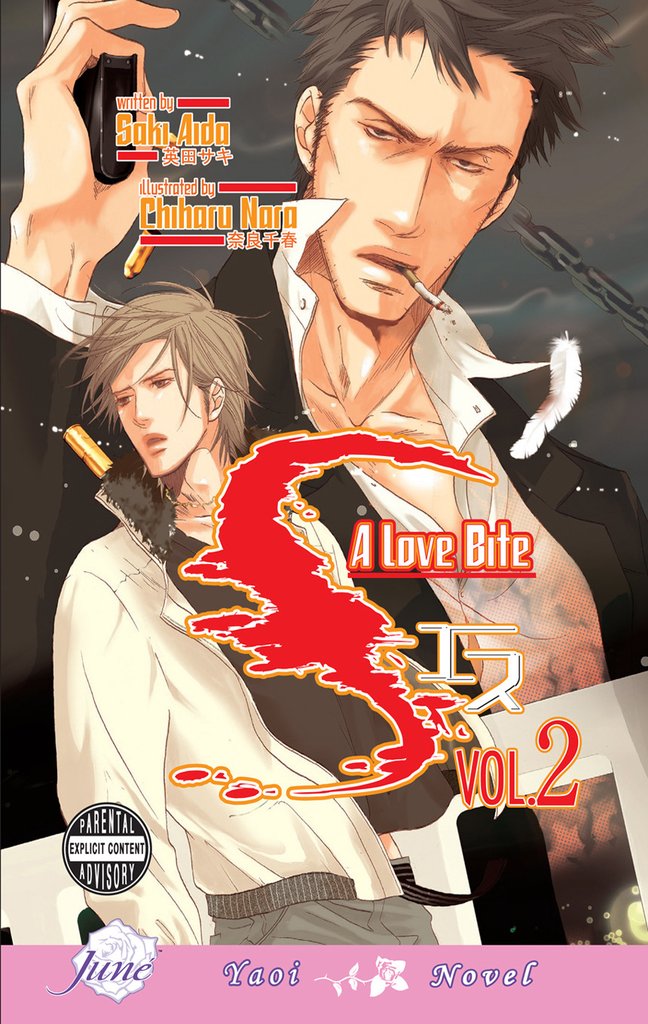 Synopsis: (From the back of the book)

Detective Masaki Shiiba’s informant or “S,” Keigo Munechika, has proven himself to be an excellent source of information. But the payment of sex for every lead given is taking its toll on Shiiba. Each moment in Munechika’s arms is both heaven and hell for the detective.

But with his new assignment as back-up to a fellow undercover detective, Shiiba learns that there are far worse things than having sex with your male S — falling helplessly in love with him, for example.

S volume 2 continues the drama and passion between a detective and his spy set in the hihgly-charged underground world of Tokyo.

So after how many years, I started reading the S series again. It’s been four years since I’ve read the first volume so I had to re-read book one first.

I speed-read the first volume to understand it again. After all, there are a lot of things that I’ve already forgotten, aside from the fact that this is a yakuza x detective story. The theme of the first volume is about an S – or spy – and the relationship between them and their detective. Book 1 tells us about the protagonist, Shiiba. It also shows us what brought him and Munechika together. For more of volume 1, you can read it here.

In volume 2, the book started with a scene between a young man and another guy having sex. At first, I thought it was Shiiba and Munechika. But then I realized that they were having rough sex, possible non-con, with one of the two dominating the younger man. Shiiba and Munechika’s relationship wasn’t like that. No matter how overbearing Munechika could be, he always leaves the decision to Shiiba. It’s a give-and-take relationship, something obviously not present in this unknown pairing.

There’s also a third person in the scene, the audience of the two. He was unnamed, like the others. When asks if he wanted to join, the guy answered that he wanted to continue watching.

I’d like to believe that these three people are Mao Takanashi – the younger man, Kunugi – the naked man and the leader of Yakuza, and Nagakura – as the observer. Also, like Shiiba, Nagakura works to gather intel for the police.

Volume 2 introduces these characters and the book revolves around their story.

Shiiba is assigned to work with Nagakura. Due to Nagakura’s infiltration to the Yakuza by joining the group, he’s having a hard time passing pieces of information to the higher-ups. That’s where Shiiba comes in. He works as a messenger by meeting Nagakura’s S, Mao.

Their first meeting shows how Nagakura and Mao’s relationship is the same yet very different compared to what Shiiba and Munechika have. For one, Nagakura has the complete control of his relationship with Mao. He is a homophobe on top of being a sadist. Slapping and taunting Mao is normal for him.

Meanwhile, Mao accepts all of these. Heck, he is even willing to betray his benefactor, Kunugi, for the detective.

Nagakura and Mao are the mirror images of Shiiba’s deepest fears. It’s like he is seeing a physical manifestation in them. No wonder he feels close to these two. It didn’t matter that he’d just met Mao or if he didn’t like Nagakura before.

As a detective and as an S, Nagakura and Mao have crossed the professional boundary. They have involved their feelings in the matter which complicates their relationship more. Meanwhile, Shiiba has been working out his feelings for Munechika. His mind tells him that his relationship with the older guy should be like what he had with his previous S – distant and professional. Yet his body craved for his S. What started as a means of payment for information becomes an enjoyment for him.

And he hates himself for it.

What became of Nagakura and Mao’s relationship served as a reminder for Shiiba – if he got in too deep, he’d crash and burn. Yet the buried feelings of Nagakura and Mao resonated with him well so Shiiba allowed himself to forgive and accept his feelings.

While for the most part of the book with Shiiba running away from his feelings and taking Munechika for granted, I loved this volume. I love how it compares and contrasts the two pairs. There’s still the obligatory smut scenes, but the limelight is on Nagakura and Mao. Besides, this volume helps Shiiba come in terms with his feelings which allows him to take a step forward.

Book 2 is titled Love Bite. And while it clearly meant as a kiss mark, I love to think of other possible meanings. Due to having fallen in love, Nagakura makes a drastic move. So as Mao. For these two, the scar they received resulted from their passionate love.

As for the other pairing, Shiiba gets a different taste of love bite – in the form of what seems like bondage. Also, Nagakura left a literal love bite on Shiiba’s neck. While all of them are bitten by love differently and while the physical marks may have disappeared, the scars are deeply engraved in their psyche and will remain for a long, long time.