PS Vita’s life has come to an end. I am sad about that fact as it’s my favorite gaming platform ever since it replaced PSP. All of my favorite Visual Novels, especially otome games, are PS Vita releases.

To think, otome games have just been localized in the Western in recent years.

If you’re new in the otome gaming world and feels pretty bummed out that it lost one of its primary gaming platforms, fret not. 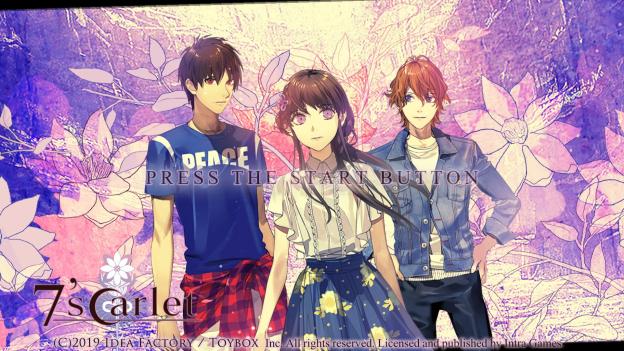 Companies like Intragames are porting VNs, most importantly otome games, to PC via Steam. For this post, I partnered with Intragames to bring you their latest release, 7’scarlet.

7’scarlet is a mystery otome game set in the far-flung country of Okunezato. The heroine Ichiko Hanamaki, visits the place to search for clues for her missing brother. As she delves deeper into the country, she uncovers the many mysteries and secrets of Okunezato and its residents.

I’ve already played this game last year. Since I’ve already uncovered the secrets once, I’ve decided to play this with my good friend for a different POV. So here’s Nami!

Nami: Yo! Thanks for having me.

Eu: Nami mostly plays RPG right? But have you played other VNs before? I mean other than Fata Morgana which we played together hehe.

Nami: I’d say I’m more drawn to plot-heavy games — those that can make me feel real emotions. The very first VN I played was Fate/Stay Night, which set the bar pretty high for me. Fata Morgana also successfully glued us to our seats from start to end, didn’t it.

Eu: It did! The writing is just superb! But I digress haha. So, before we played the game, what was your impression? For me, it’s like a revisit. I’ve picked up some minor details that seem trivial the first time I played but is actually very important in the story along the way.

Nami: You told me not to read spoilers so I ended up not knowing anything prior to us starting. I thought we were gonna play a generic dating sim game! Lol. I was surprised how interesting the plot is for an otome game haha. I loved the supernatural mystery vibe to it while still maintaining the relaxing atmosphere. I really liked the art too. It’s quite simple but very fitting to the story.

Eu: Sorry not sorry LOL. Though I think for mystery games like this, it’s ideal not to have any idea about the story. It would be a pleasant surprise.

Now that we’ve finished the common route, what do you think about it?

Nami: The common route felt a bit lacking so it’s a must to play the other routes to have your fill.

Eu: That is true. 4-5 hours of gaming time is not enough to give away anything about the plot but is enough to introduce all the characters.

I remember when I started playing, my fave guy was Hino. At that time, I was so into the childhood trope. How about you? Do you have a fave guy at first sight? Yuzuki (the owner) maybe? Ahaha.

Nami: Definitely Yuki because he’s so dependable! He’s underage though, so no luck. Lol. Kidding aside, I liked Hino a lot too because he’s the best friend who stuck with her through thick and thin. He’s so consistent even though she has friendzoned him plenty of times! Ichiko would be dumb to let go of such a catch.

Sousuke also made an impression on me because I personally liked his character design best out of all of them. Even Ichiko took notice of him and made her blush furiously when they first met (which didn’t happen with any other guy).

Eu: Oooh! I didn’t know Sousuke left an impression to you like that! I thought it was just because we made fun of how cliche his first meeting was with Ichiko LOL.

Is there a special reason why you chose to start with Hino? We could have started with Isora but you chose Hino. Well, I chose him at first too but not because he’s my fav LOL but because I’ve read from the guides that it’s better to start with him hehe.

Nami: When the branching started, Isora’s character wasn’t fully fleshed out yet and I didn’t feel a strong connection between him and Ichiko. So I thought choosing Isora would feel forced. Hino has the childhood friend advantage but I already noticed then that their chemistry worked very well.

Eu: That’s true. It’s just hard not to support Hino after seeing the way they treat each other.

Speaking of order, if there’s no required order of play, what would be your route order? For reference, here’s how the routes go. (I’m pretty sure you can interchange True end and the Secret Character’s end)

Nami: I’d choose the same except I’d probably put Toa last (before the true end). I feel like his route will be more of comic relief. 😅

Eu: Are you excited for any of the guy’s route? I’m actually excited for you to know the rest of the story! So don’t read spoilers! Haha!

Nami: Yuzuki! I’m super curious how he’ll have a change of heart.

Eu: Any other things you want to talk about the game?

Nami: So much cliche all throughout the game! Seriously. We could’ve listed them down! Oh and one more thing. I think that Ichiko is such a Mary Sue because every guy hits on her lol. It’s the pet peeve that I have with otome games. I kinda wish they made the protagonists more human-like and believable.

Eu: IKR. I enjoyed making fun of those scenes with you. We could probably make a top 10 cliche things or whatever LMAO.

And about Ichiko… we’ll talk more about her in the next post? Hopefully? 😂

Well then guys, that’s it for now. This has been Eu and Nami. We hoped you enjoyed reading this post!

If you’ve missed the PS Vita release or just don’t have PSV, you have no reason not to play this now that it is available on PC! 7’scarlet is on Steam! Get it here.

Note: This is a sponsored post. A review code was provided by the publisher for the purpose of this blog post. The views expressed in this review are our honest opinion of the game.