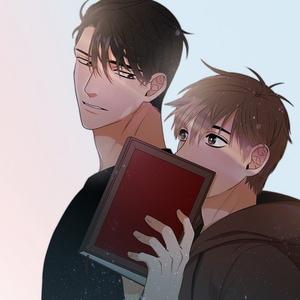 Daniel does everything for Alan. When Alan’s sick, Daniel nurtures him back to health. When Alan’s house is dirty, Daniel cleans it. When Alan is dirty…Daniel cleans him too. Favor after favor, Daniel can’t help but keep wondering, are they more than just flirty friends? Or are all of Daniel’s efforts for love in vain?

I’ve been keeping tabs on this series since I read the first few chapters. Fortunately for me, last October 5, Tapas had a free comic for 24 hours so I can finally read this until the most recent chapter which was close to the end! The only ones that I had to pay were the last 3 chapters.

Just okay. Some parts are enjoyable. Most parts are quite problematic.

This is hard because this is not for everyone, and I can’t think of a specific type of reader that this would appeal to. 😅 So I guess for people who want some fantasy and dark twists in their story?

Continue reading below to find out why you should or should not read Lover’s Vain.

The story starts light and promising. Heck, it is easy to relate to because I root for Daniel right from the start. I’m weak for one-sided love stories so I’m drawn to his dilemma. Things started to go awry for the main couple when Daniel finds a book where Alan’s supposed to marry a girl while Daniel remained a side-side character.

It’s not that the story is bad per se, it’s just that it has some awkward pacing, like we’re jumping from one scene to another that I feel like I’m getting whiplash of events. The timing of each jump is quite jarring especially if it happens in the middle of a scene. Like one second, the setting is in the hospital, then the next panel shows the house without even showing or implying that the characters leave. Then suddenly, it’s another scene again. It is hard to tell if it is supposedly artistic storytelling or just another way to show that the characters are having lucid dreams.

Also, the last few chapters feel like the story is wrapped up in a haste. They are just only understanding their feelings for each other, and then, in the next moment, they’re going out of the country? Like huh, Daniel doesn’t have that much backbone yet??? And the way they got together… 😑 Daniel has been manipulated and pushed into a corner, so he had no choice but to be with Alan. If that isn’t toxic, then I don’t know what is.

Season 2 is introduced as a much darker and messier story than the first. It is complicated, but I feel like it gives hope that things will be better than the previous pairing. But things start getting toxic real fast.

At this point, I’m seeing a recurring theme in both seasons – one-sided love, childhood friends, manipulation, and possessiveness. Especially the last part where it is used as a justification of love between the couples.

This season starts good, as always, but by the time I finish the latest chapter, I’m just so tired, and not because the story is emotionally taxing, more like, it is mentally exhausting. So many questions and even questionable actions from the male lead.

The ending, oh god, is a cop-out. The whole red book/demon thing is still vague, despite many attempts of explaining it. But the major offender is the way things are resolved. The lies and deceptions remain. I get it, not everyone likes a HEA or HFN. I’m not even asking for that. What I ask for is decent enough ending, meaning the growth of the characters. Not going back to square one from where they are at the start.

How I wish I could like these characters, but they’re all convoluted, toxic, and problematic, especially the male leads. All of them are excessively possessive and downright manipulative. Like, what is consent, my dudes? They’re basically cornering their partners until said partners don’t have any place to hide. Except for Colin because at some point, he is able to fight back. But that happened once, then reverts back to being played at the palm of the ML. The MCs seem like prey in the spider’s web.

If it’s just the character design, I love it. They are beautiful. But on-page? They’re confusing. For one, I can’t, for the life of me, distinguish the black-haired characters. I’d have to stare too long on a single page trying to find a distinguishing feature that would remind me of a character. And there are like 5 or so similar-looking characters.

The speech bubbles are kinda confusing too. There’s a scene where the cousin Chris and the friend Ross are talking, and the bubbles made me think that it was Chris’s dialogue only for Chris to say indicating that it is Ross all along. I read that scene a few times, and I still can’t wrap my head around it.

If I have to stop every single time and think who’s who and who speaks what, I’d get a headache. I’d stop caring for the characters because I’m too busy figuring my way within the story.

I’m just…so tired. I so badly wanted to like this. I’ve been wanting to read this after all but to be disappointed this much? It’s kind of a bummer because I liked the start. I liked it so much, but then, everything just had to go downhill from there.

I’m so glad that I read this during Tapas’s free comic day if I had to pay, I would have been harsher. I paid the last few chapters and I regretted it so much. I wish I could have used those inks to read other series or support other creators.

If you enjoy this post, please consider supporting me on Ko-fi! Any donations made go back towards keeping the site running. Your support is greatly appreciated!