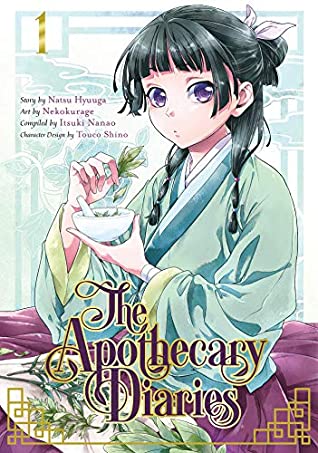 After breaking a “curse” on the imperial heirs, a palace servant with training in herbal medicine is promoted up the ranks to food taster…and right into the thick of palace intrigue in this lushly illustrated period mystery series!

Maomao, a young woman trained in the art of herbal medicine, is forced to work as a lowly servant in the inner palace. Though she yearns for life outside its perfumed halls, she isn’t long for a life of drudgery! Using her wits to break a “curse” afflicting the imperial heirs, Maomao attracts the attentions of the handsome eunuch Jinshi and is promoted to attendant food taster. But Jinshi has other plans for the erstwhile apothecary, and soon Maomao is back to brewing potions and…solving mysteries?!

I was first introduced to this manga after reading a blog post at Al’s Manga Blog. I can’t pinpoint exactly what made me interested, could be the setting or the main character. A pharmacist in a historical setting? Sign me up. 😁

I love her from the get go. Maomao is very indifferent to life or to anyone unless it involves making of medicine. Her dry humor makes me snort or smirk.

Aah. Jinshi. Typically, he’s the type of character I like, yet somehow, Jinshi is pretty meh to me despite my rereads. There’s just so many questions about his character — Why is he close to consort Gyokuyo? Is it okay to hang around the Emperor’s favorite? And who is he and what is his position in the palace? The Emperor’s spy? What’s the point of fliritng with Maomao?

I wonder if he’s going to be the love interest or if there will ever be romance in this series. A part of me wants him to be the LI. Another part of me doesn’t want to.

This volume seems to be more of an introductory book so there’s nothing much other than getting to know the characters and the setting. Don’t expect anything shocking in the 1st volume as the book focuses on Maomao’s day to day activities and her involvement in the palace stuff, but they’re mostly minimal at this point.

As of this writing, the book 2 of the manga is already available and so as the 1st volume of the translated light novel. I plan to read on those. I can’t wait to get my hands on them!