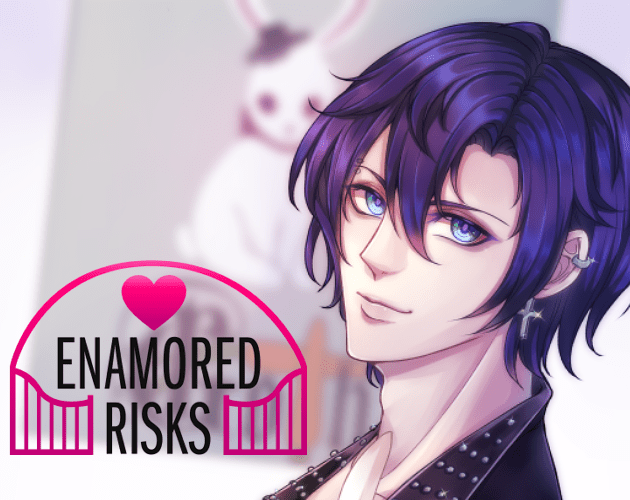 I know, I’m so late. I meant to play and write a post about this last year, but RL turned hectic while I was transitioning to a new job. On top of that, I was just not in the mood to play any games for a while. So there’s that. 😅

For those unfamiliar with NaNoRenO, it is an annual event that happens every March as game developers take on the challenge to create a visual novel within a month. Enamored Risks is Crystal Game Works’s entry for the NaNoRenO 2020. The story follows Alex, a college undergrad who feels burned out from her school works and her parents’ hassling. She overhears about a group of urban explorers and their adventures on abandoned buildings and other structures. Wanting to get out of her ordinary life, she decides to do some explorations. With the help of her newfound friends, she discovers not just the beauty within the ruins but also a different side of herself.

Urban exploration is something new to me, and I applaud Crystal Game Works for creating an interesting story around it. What I find even more interesting is that, despite the length, the devs are able to squeeze in personal and life issues of the characters that make them relatable to the players.

I liked the idea of Enamored Risks, and I so wished that this was a longer game. For one, I feel like I’ve just scratched the tip of the iceberg when it comes to the complexities of the characters. Like serious issues are condensed to fit a short game which then resulted in them being glossed over. I admit, that stuff threw me off-guard initially. But just as I was starting to get into it, the story had moved on.

Not to mention the somewhat random pacing, like jumping from one scene to another without the proper transition of scenes like they’re doing urbex then blink, and you’ll get a school scene unrelated to the previous one.

Alex reminds me so much of Heejung from Dandelion – Wishes Brought to You. One thing that bothers me the most is her almost instant love for adventure. She doesn’t peg me as someone impulsive, yet she just ditches her studies and goes on an exploration. I was expecting a moment of epiphany, even if it’s not something grand. But wow, the change in her is rather fast.

But I liked how she’s the grounding voice among them, more than Paxton even. She keeps their group stable when the other three gets wrapped up in their own dilemma.

Finn is Alex’s classmate and the one who scolds her the most when she first started exploring alone. It’s funny how Finn’s annoyed at Alex for even trying to be in a dangerous place alone, but then, he puts her in dangerous places and does even more dangerous things once they got together –  a complete opposite of what he was preaching before.

Zaina’s the group’s photographer and an all-around best character of the game which is a pleasant surprise because I don’t always like the female LI in an otome game. Although she has some issues, like the guys, her character feels more fleshed out. Besides, she and Alex have so much more chemistry and compatibility than Finn or Paxton. I enjoyed all of their scenes together.

I was expecting a lot at Paxton’s route, but he turned out to be kinda bland and forgettable, maybe even more forgettable than Finn, despite being build up as the cool guy. He seems like the dependable one in this group with Finn being too fickle and eccentric, and Zaina too brash and kickass. But Paxton turns out kind of meh. I don’t remember much about his route other than thinking I should have done Zaina’s route last.

The stills are much better than the CGs because the CGs are inconsistent like they were done by different artists.

I like the music, but I noticed that it doesn’t change when in a romantic scene. That might be a reason why I didn’t really feel the romance building up between the characters on those parts.

There’s also an overlapping bgm in Paxton’s route, and it sounds horrible during the dancing scene. I thought that I accidentally opened my Spotify playlist.

All in all, Enamored Risks, while it has its shortcomings, is a pretty solid game given its length. It has a unique story, an interesting set of characters, and it is free. The 4+ hours that you’d spend in the game is totally worth it.